It’s been a while since I’ve written on this blog. Mostly this was because of the day job that took up most of my time this past year, and partly it was because I had to move twice. Long story, basically both my apartments were declared illegal. I’m in a better place now, and there’s a big career shift happening so I have a moment to spare.

Procrastinating from the major unpacking job I have to do, I decided to put on Io, the new release from Netflix. And almost immediately I was struck by the similarity to a childhood favorite of mine, Studio Ghibli’s classic, Nausicaa, the Valley of the Wind. Io has many of the same themes, but is so amazingly American I thought I should mention it in a review here.

END_OF_DOCUMENT_TOKEN_TO_BE_REPLACED

I reviewed Six-Gun Tarot a little while back, and it wasn’t exactly a glowing review. So I decided to give R. S. Belcher another shot with Shotgun Arcana, the second in his Golgotha series. With Six-Gun, I had a lot of problems with the false sort of feminism and cultural diversity he showed in those pages. In short, the Old West wasn’t exactly a great and shining example of equality or magnanimous spirit, and what was wrong with it was almost directly transferred into the pages of Six-Gun. He even invented a totally new slur for Chinese people I had never heard before, so there’s that. So how does Shotgun Arcana fare? END_OF_DOCUMENT_TOKEN_TO_BE_REPLACED

My wife doesn’t like horror movies very much, even though guffaws every time some doofus falls down on America’s Funniest Home Videos. So my story with Alien Covenant happens a lot. I want to see it in the theater, and she doesn’t. I might have gone to it for our drive-in excursion but there was a double feature of pirates and space superheroes… so there. Last night I got antsy and rented it off Amazon, which made me slightly annoyed that it didn’t come with prime and that I’m going to see it on the public library shelf a little while later.

The dubious privilege of Amazon Video is that you get to see comments. Which is frankly annoying when people ruin the ending before you even get to see the movie. But reading them, I get the sense that people just don’t know how to watch movies anymore.  END_OF_DOCUMENT_TOKEN_TO_BE_REPLACED 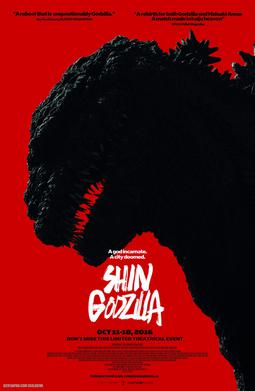 Ah, my local library strikes again, this time with a title that’s been long in coming: Shin Godzilla, probably the best inheritor of the Godzilla name to come along since the original film. The Guardian got it pretty right with their review, so I’ll just link you to it. But for me, this was a spectacular return to form with one of my favorite film directors in the world, Hideaki Anno, so here’s a little input of my own.

END_OF_DOCUMENT_TOKEN_TO_BE_REPLACED

I woke up this morning to find out that a white supremacy rally had gotten violent and how one of the Nazis decided to run over the other side even after the group was dispersed by the Charlottesville authorities. @JuliusGoat voiced the communal outrage over this farce as eloquently as is humanly possible, and I was just feeling a little cathartic when I read about a hospital in India whose oxygen provider shut off the flow for an unpaid bill and killed more than 30 children who were relying on the stuff to live. Even for the news, that’s pretty damn depressing for a Sunday morning.

On the surface, these two events being reported in the same weekend seem completely unconnected. They’re on different sides of the planet, they involve two different regional groups. One is culturally motivated and the other is an issue of bureaucracy gone horribly wrong. But through a red haze of rage and sorrow, I’m motivated to write about how they’re the same many-headed monster. Once we know that, we can stop cutting off the heads and kill it once and for all.

END_OF_DOCUMENT_TOKEN_TO_BE_REPLACED

“FUTURE THAT NEVER WAS” AVAILABLE NOW: